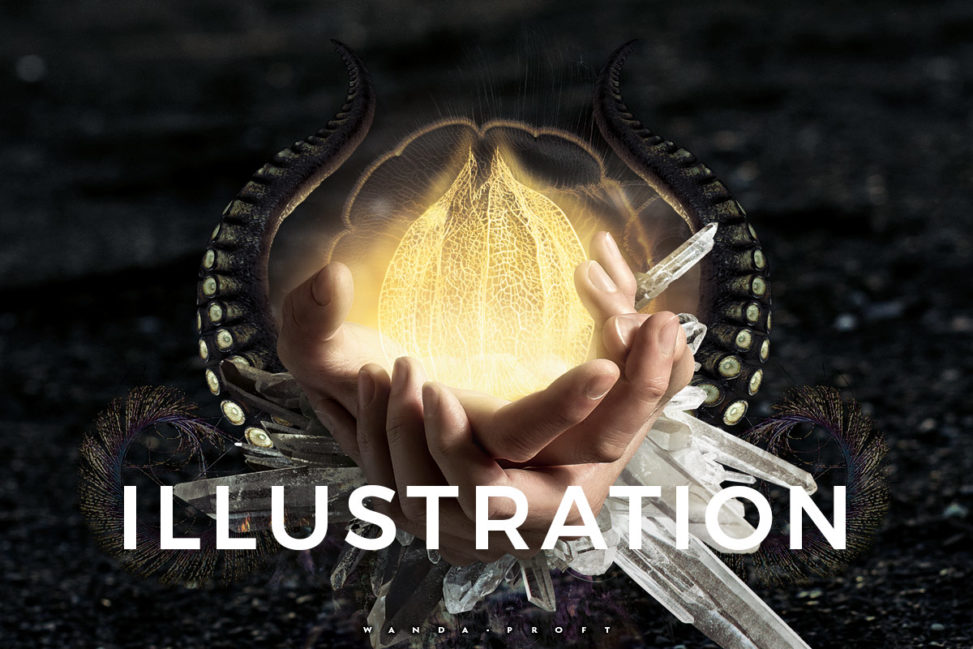 The cover illustration for the documentary photo book ›SCARGOT—NATURE OR NURTURE—the journey to a new album‹ was initially created as album cover for ›NAM‹, the band’s first full-length album. After replaced by another cover artwork closer to the illustrations in the booklet, this illustration now embodies the essence of the album creation process as a book cover.

Two concepts are imbedded in the illustration: The lotus as reference to the album concept as well as the idea of a strengthening talisman.
In Buddhism, the lotus stands for human development from root / birth to full blossom / enlightenment as well as for getting through hardships in life. Early drafts show the shape of a lotus blossom as well as the ground as reference to the dirt, every lotus starts its life in.
The hands, for which I used photographs showing singer Chin, are representing the idea of the ›talisman‹—a word the vocalist came up with himself to describe the knowledge and strength we gain from personal experience.

In the background, I am using a photo taken during the photo shooting I conducted for the album promotion. Small stones and splinters of glass on the ground reflected the sunlight and added a unique pattern to the ground, which we took advantage of both in the band photos as well as for the cover design.

Trying various options of renditions, effects, and backgrounds, I came up with seemingly countless drafts—more, I suppose, than I’ve ever had in any other project so far.

Even small details were tested and discussed with the band. Finalizing the drafts in a comparatively reduced, well balanced illustration, the photo collage now appears like a talisman-like creation itself.
The shapes that were initially conceived for a square format are now coupled with strong title and subtitles on a high size—and still capture the viewers’ focus on the treasured figure of light on the book cover of ›SCARGOT—NATURE OR NURTURE—the journey to a new album‹.

The creation of this photo collage was characterized by both glee and frustration, but I’m very satisfied with the outcome. In a way, also the process to reach the final product captures the goal we had in mind: Reflecting the growth we’ve reach in life, through good times and hardships. It’s the idea of the lotus and the talisman all over again. Consequently, there couldn’t be a better cover to present this unique book.